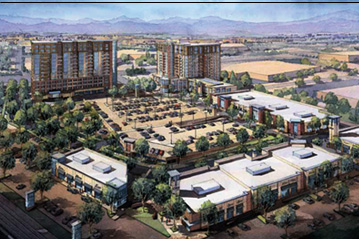 Hypo Bank of Germany is the new owner of the Landmark Complex in Greenwood Village that includes the two Landmark luxury condominium towers. While the retail complex thrives, questions remain about the future of the residential condominiums.

The opulent retail and residential complex in the posh Denver suburb has been an interesting story since the project began over four years ago.  The complex consists of 250 residential units plus a 168,000-square-foot shopping center, The Village Shops at The Landmark

that includes a luxurious movie theater and the popular Comedy Club. The complex opened for business in 2008.

The Landmark Condominiums were originally marketed as ‘The most luxurious condominiums in the Denver market”. Lavish dinners and even Cirque du Soleil entertained potential homeowners and real estate brokers alike. The amenities of the towers include valet parking, wine lockers, outdoor pools and even a dog park.
Some of Denver’s high profile movers and shakers moved into the first tower of the residential condos originally. It was such a success that the developer, Zach Davidson, began a second tower and residential “Brownstones” at even higher price points.

Hypo Bank has yet to announce their plans for the residential condominiums. But, they have reportedly met with several prominent Denver real estate developers and marketers as they begin to conceptualize a new plan. Meanwhile, some residents have formed an Ad Hoc Committee to monitor the future developments.

Fortunately, The Village Shops and entertainment venues continue to be popular with Greenwood Village residents. The shopping center shows all the signs of a vibrant pedestrian mall with successful restaurants, shops and taverns. The luxurious movie theater is a destination for movie goes from all of southeast Denver’s suburbs.

My prediction: New ownership will lower prices, maintain the high level of services and create a successful residential environment in the long run. The only issue is how long that might take.