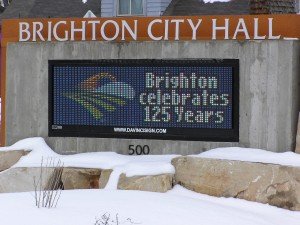 What does Rick Cavallaro have in common with Brighton, Colorado? They both have birthdays approaching.

As I approach my birthday each year, which happens to be later next month, I always have a tendency to think back as to how quickly the time has gone by. Ironically, it seems to go by quicker and quicker each year as I grow older.  I am not afraid to tell my age and this year I will be 53. Then I start thinking about how much the world has changed in the mere 53 years that I have been alive.

Which brings me to my point, the city of Brighton will be a glorious 125 years old this year in 2012.   This small, agriculturally based city located northeast of Denver has actually been around for quite awhile.  I can remember back about 20 years ago when Brighton seemed like a small town somewhere in the boonies where it seemed that no one ever went there for any purpose.  Today, Brighton seems literally connected to Denver and is growing like crazy.  Now they have a bunch of the big box stores like Target ®, JC Penney ®, Lowes ®, Home Depot ®, and Kohl’s ®, the city is also infiltrated with smaller mom and pop type stores that you will only find in Brighton.  Plans for the city include some major expansion along the I-76 corridor.  A new hospital (Platte Valley Medical Center) has already been built there and future plans call for additional housing, retail and a technology center.

Apparently, the city was incorporated in 1887 when Daniel Carmichael, a real estate agent, began buying land in the area and named it Brighton in honor of his wife’s birthplace, Brighton Beach, New York.  Back in the day, the city’s population was only 175 people. Now the city, which is one of Colorado’s fastest growing cities, is looming at 33,000 people and continues to grow.

Brighton will be enjoying its birthday festivities all year long but will highlight the merriment with a gala event at the 4th of July Celebration.  You can find more information on this by visiting www.brightonco.gov.

In light of all this, I started thinking about some of the other local cities and when they were established.  Here are some to consider:

City of Westminster – started circa 1885 and actually began as Harris Park. This makes it about 127 years old.

City of Thornton – incorporated in 1956 as Thornton Community – making it 56 years old.

So a big HAPPY BIRTHDAY to Brighton at 125 years old – you are still going strong.  I know I will be at the celebration on the 4th of July up in Brighton and I hope to see you there.