Snarled traffic on Broadway Blvd south of I-25 will be worth the trouble when the renovation of the Better Broadway Project is completed.

Driving up and down South Broadway Boulevard in Denver  – just south of where it connects with I-25 – has become unbearable! Cars backed up for blocks, new lanes, huge cement trucks, and construction workers with their “slow” signs – it’s an anthill of activity. And yet, many people wonder what all the fuss is about…

In 2010, the Better Denver Bond launched a $34.4million project known as Better Broadway that will give South Broadway the face-lift it has so desperately needed! 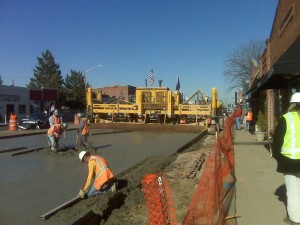 Construction on South Broadway in Denver will result in a renovated business district.

Traditionally, South Broadway has been a mixed bag of run down industrial buildings, seedy bars and, conversely, unique antique shops and quaint eateries. With the installation of the light rail system, it’s access to both I-25 and downtown, plus its proximity to the desirable Plate Park neighborhood and busy DU campus, South Broadway really is the gateway to the city and it’s about time it became a destination. This new plan will bring that dream to reality.

The Better Broadway Project expands 17 blocks – from Yale to Arizona – and will create a vibrant “Main Street” corridor that will be more pedestrian and driver friendly. The plan includes widening the streets and the sidewalks; installing new turn lanes and traffic lights; and, erecting medians that feature plants and trees. The hope is to also turn South Broadway into an area of bustling economic activity – restaurants, boutiques, and cafes – reminiscent of Lowry and The Streets of Southglenn. No doubt, the hundreds of merchants currently located there are banking on the same thing.

Having just bought a home near this new project, I am very anxious to see what this re-invention of Broadway will do for property values. Our home is very similar to most of the cute little bungalows and “Denver Squares” dated from the early 1900’s that are typically found in that area. Many Buyers are attracted to these surrounding neighborhoods because of their larger lots, affordable prices, and proximity to Porter Hospital. Of course, it doesn’t hurt that residents are also just steps away from neighborhood parks like Harvard Gulch and Platte Park. The Rosedale Community Garden is operated by the Denver Urban Gardens and is gathering place for many happy gardeners tending to their vegetables and flowers during the summer months.

Home prices here start in the low $200K’s for the smaller fixer-uppers with no basements and range all the way up to the mid $600K’s for the brand new half duplexes with all the upgrades. We chose our home because of the location – close to both downtown and the southern suburbs. And now, with the “New Broadway” renovation on the horizon, we couldn’t be more pleased with our decision. I love the idea of just hopping on my bike and venturing off to a new restaurant or to window shop – a la Wash Park. And now that type of “urban” living will be available to Buyers in a variety of price ranges.

Another reason to love the Better Broadway project is that it will generate over 200 construction jobs – something sorely needed in this economy. This project will be completed in three phases – the final phase concluding the end of 2011.