Do you remember the Soup Nazi from the old Jerry Seinfeld show on television?  He was the guy who ran a lunch place that served great soup. But, he made it difficult, and sometimes  impossible, to buy his soup because of all the rules be established.  It was funny.

Now, the new Soup Nazi comes as an appraiser and he is not so funny.  Rules recently established for him are making it much more difficult for homes to appreciate and the Denver real estate market to recover. 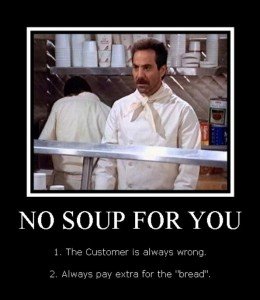 Appraisers now can say No just like the Soup Nazi.

More frequently, it’s possible to find a buyer who initially is willing to pay the asking price for a home only to find that the appraiser does not agree that the value is sufficient to obtain a loan.

When this happens, there are three possible results.  First, the buyer can sometimes pay an additional down payment equal to the deficiency of the appraisal.  Second, the seller can lower the price.  Or, the parties can agree to each pay a portion of the deficiency.  But the real problem is that the buyer may be so scared of the appraisal that he decides not to buy the house.

This just happen to me.  I put a gorgeous new home on the market in Greenwood Village.  In spite of a reasonably aggressive price, the seller obtained three offers within 10 days.  The property when under contract essentially at full price.  But that was before the soup Nazi entered the picture.

The appraiser was a half hour late for the appointment to see the house.  I should’ve realized then that this was not a good sign. Still,  I provided the necessary supporting comparables for the value of the house to the appraiser when she finally showed up.  But, she did not use all of my comparables and found some others at lower values.  The result was that the appraiser valued the home $12,000 less than the agreed-upon price between the buyer and seller.

This created a problem that could have jeopardized the entire transaction.  The seller was outraged that a third party was interfering in what had been a meeting of the minds between the buyer and seller.  The buyer was afraid that he’d made a mistake and overpaid for for the home. The result was a compromise where the seller lowered the price and the buyer agreed to bring more money for a down payment.

This scenario is going on throughout the Denver metropolitan area right now.  Stronger demand can be seen in several of the better neighborhoods in Denver.  But sometimes appraisers are not valuing the home at those higher prices.  The result is that some transactions are simply falling before they can get to a closing table.

Two weeks ago another broker called me asking for help.  She had a condominium unit under contract at a good price because the unit was an outstanding condition and have full mountain views.  But the appraiser placed the value $60,000 below the agreed-upon price.  I gave her the best comparables I had for that building.  But it didn’t help.  The buyer ultimately was scared off by low appraisal.  The seller realized that the unit would simply not appraise for the value in this market and withdrew the listing.

Appraisers are not the villains.  They are the victims.  New appraisal rules make it difficult to properly adjust for differences between properties.  These rules were set up to hinder the kinds of bogus appraisals that were prevalent during the real estate boom in the early 2000’s. But now, the result is the same rules are keeping the real estate market from recovering.

If appraisers were allowed to make the proper adjustments values would be reached.  For example, the appraiser of the condominium likely was not able to make adjustments of over $100,000 for views.  But that indeed is what the market will bear in that building.  It’s outside the scope of the new appraisal rules but it is the reality.

Who suffers? Buyers can be prohibited from buying the homes they want at the price they want to pay.  Sellers are prohibited from receiving market value for their property.  And the real estate market slows down more than it otherwise would.  New sellers become discouraged and decide not to sell at values appraisers will reach in this market.  So, there are fewer homes from which to choose and fewer sales.

This is a perfect example of the law of unintended consequences.  When an autocratic bureaucracy attempts to fix one problem it creates another.  Now, the new rules to  inhibit bogus appraisals are instead hindering the real estate market recovery.

Welcome to the Soup Nazi and all the rules he has to follow.  It’s just the way it is.