Stapleton, Belmar and Lowry in Denver were developed as new “Town Centers”. They have homes, condos, shopping, entertainment and even some commercial buildings all clustered into a planned community. Now, the Town Center concept is spreading to the Denver suburbs. 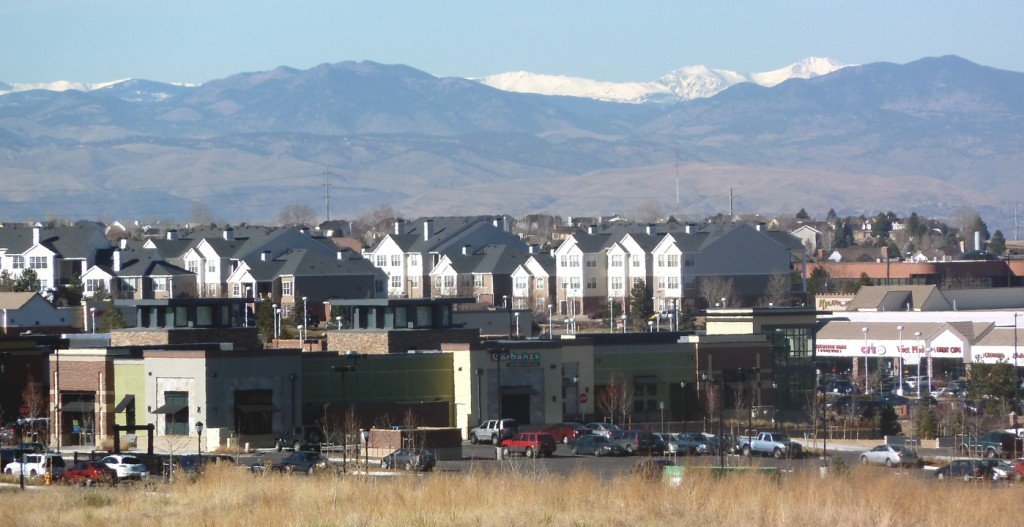 Retail shops, townhomes, and patio homes are appearing where the prarie meets the new RidgeGate Center in Lone Tree, Colorado.

RidgeGate in south-suburban Lone Tree, Colorado is now being developed as a planned Town Center with mixed uses. Lincoln Commons has already opened with retail that will grow to 100,000 square feet. Office space is under construction and over 100 residences are already occupied.The title of this concept is slight changed. This time it is called Urbanscape. But, it hard to imagine this as a urban center because now cattle graze and coyotes prowl on the majority of the 3500 acres untouched yet by the yellow bulldozers and graders.  This Center will have several other differences.

The new Sky Ridge Medical Center is a full-service hospital operated by Health Corporation of America at RidgeGate in Lone Tree.

It is the first to contain a full-service hospital, Sky Ridge. It is the first to have it’s own Cultural Arts Center for live music, plays and opera and ballet. There will be a 500 seat auditorium and other public spaces when it opens next fall. It  will also be the first first town center to have light-rail service to downtown and beyond right on the property. Also, it claims to be

Of course, it will also have restaurants, shopping and a movie theatre. There will be lofts, town homes and single-family homes too. But, unlike Lowry and Stapleton in Denver, this new suburban “Town Center” is not a redevelopment of an Air Force Base or a former airport. It is a brand-new complex built on raw ground just off Interstate 25 going south from Park Meadows Mall. In fact, it has its own Interstate exit which just opened last fall.

Also, this year, restaurants and shops began to open as construction began on the new Cultural Arts Center which was funded by a vote for a higher Lone Tree sales tax.

The new RidgeGate Cultural Arts Center will open this fall in Lone Tree, a Denver suburb.

So far, Five Guys Burgers, Garbanzo  Mediterranean Grille, Qdoba and Runner’s Roost have opened. Also, Sprouts Farmers Market has opened. It’s sort of a discount Whole Foods (which also has a store just two miles west on Lincoln in Highlands Ranch next door). There is also a dentist, a cleaners, a spa and a bank there. SuperTarget is right at the property too.

The RidgeGate community is small now. There are several dozen townhomes and patio homes now. But, eventually there will be a projected 10,000 homes. Plans call for slow development over the next 20 years. As RidgeGatge grows so will the parks and open space which will eventually comprise 1000 acres.

RidgeGate developers call it an “a sustainable…eco-smart blend of urban and open”.  As a Realtor and neighbor, I call it a good potential investment. As the community grows, the Cultural Center Opens, the light rail station is built there, home values are bound to increase. This may well be one of those “ground floor opportunities”. Townhouses are priced from the high $200’s now.