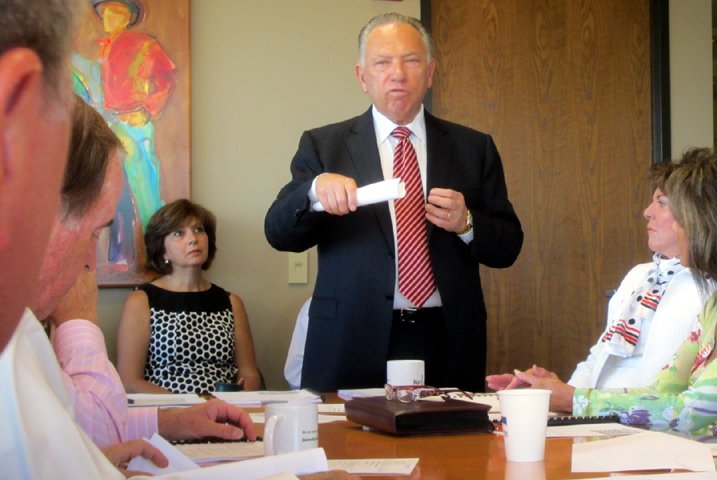 David Mandarich, Co-Founder and President of Denver-based MDC Richmond Homes, one of America’s largest homebuilders, spoke at my Kentwood Company Sales Meeting yesterday. Calling new home starts at “depression levels”, he said that builders are coping with the real estate market by building smaller homes and eliminating spec homes. He and his competitors are mainly building “in-fill projects” within existing communities rather than starting entirely new subdivisions.

“New home builders have to compete with foreclosures”, Mandarich said. “While the consumer will pay a very slight premium for brand-new, it isn’t very much. We have to provide value to the consumer. But, our buyers generally want their own choices in things like countertops, flooring and cabinets. That why we say ‘It’s personal’ for our buyers”.

Richmond homes began modestly in Denver and became Denver’s largest home builder in the 1980’s. Now, they build in many western markets. Most recently, they acquired the largest homebuilder in Seattle, Washington.

“All the largest home builders have had to cut inventories of land”, Mandarich explained. “It’s good to have cash and no debt. And, that’s what we have now.”

Still, MDC Holdings, as the publicly-traded parent company of Richmond Homes, is loosing money. In the first quarter of this year it lost $19.9 million. That was an improvement from a loss of $20.9 in the period of 2010. What was most surprising to me was that the gross margins dropped in the first quarter to 13.7% as compared with 22.4 percent in the 2010 first quarter.

When Mr. Mandarich spoke to the Kentwood Retreat at Cordillera Lodge in 2008, he said that Richmond was in the process of adding more floor plans with less square footage. He said he was actively buying in-fill parcels of land from distressed homebuilders and paying “10 to 25 cents on the dollar”. He also said he was in the process of mostly eliminating homes built before a buyer made a contract. So called “spec homes” are popular with Denver relocation buyers but are expensive and risky for builders.

Yesterday’s discussion showed that Richmond has continued to move to a more cautious and opportunistic approach to a real estate market Mandarich calls at “Depression levels”.