In this hot market,  Denver’s mid-century modern homes are facing an increased threat of demolition in some neighborhoods. These architectural masterpieces face extinction as more and more are bulldozed down to make room for new homes and McMansions.

Home buyers, homeowners, and investors are maximizing value by maximizing the amount of square footage they place on a lot. While this seems rational in a cold dollars-and-cents world, it’s worth standing back and thinking about what’s lost when demolishing one of Denver’s mid-mod treasures.

Giving up Quality of Space 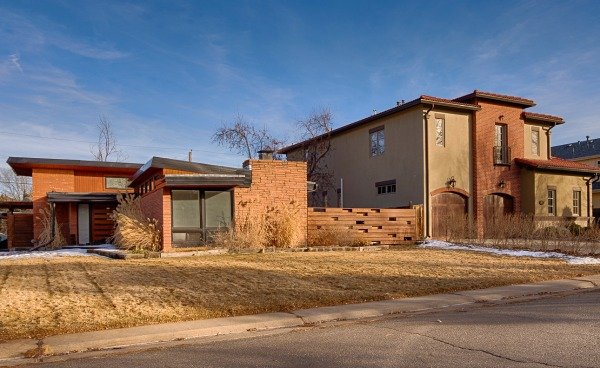 The contrast between big boxes and modern architecture is striking.

There are two ways to look at ‘improvements‘ on a lot. The first is quantitative, the amount of monetary value that a house adds to a lot. And, the second is qualitative. That’s the way that house improves the quality of life for those that live there. In a perfect world, the two improvements would go hand-in-hand. But in this imperfect world, what often maximizes monetary improvement (square footage inside), does not necessarily maximize the enjoyment of it.

Mid-century modern architects were concerned about the quality of what they designed. Houses were kept at one story to keep them on a human scale back then. As a result, the design of houses created a combination of indoor and private outdoor spaces, effectively extending the living space to the outdoors.  Walls of glass blurred the lines between the two.

And, they aimed for a sort of casual and fun style of living. Although interior space in mini-mansions is plentiful, the houses are usually large echo-chambers inside. They lack thoughtful design though. Homeowners often then grapple unsuccessfully with how to make such large spaces livable and aesthetically pleasing.


Mid-century modern homes architects took great care to make structures that were responsive to the environment. Placement and design of elements like walls of glass, outdoor spaces, roof overhangs and even the height of the building were carefully considered to connect the interior and exterior. This created bright and open spaces during the day and outdoor living spaces.

The outdoor areas take advantage of prevailing breezes and sunlight to be private, comfortable, and enjoyable. By demolishing such carefully considered houses and replacing them with two-story boxes, these highly valuable outdoor living spaces and bright and airy indoor living spaces are lost. As a result,  houses are less healthy and less pleasant. The outdoor living space is typically restricted to a small front yard and tiny backyard. In most cases one of yards will be covered in shade caused by the height of a second story.


There’s an exciting thing that happens in a neighborhood of all one-story houses. There is a lot of visual privacy between houses. This privacy is enhanced further by careful placement and design of fences, screens, and landscaping. But, when a house goes to two stories,  the quiet, private sanctuaries in the otherwise bustling city are lost. Worse, when you are one of the first to do it, you have robbed everyone around you of their privacy. But your privacy is not safe either. Remember, if you can see them, they can see you. So you and your family will keep your shades drawn in your upstairs bedrooms. That further disconnects you from the outdoors. Moreover, when your neighbors scrape their ranch homes and decide to build up as well, then no one’s backyard will have visual privacy. But, at least everyone can be voyeurs into each other’s lives together.


Most mid-century modern houses, especially those larger custom builds, use a different kind of construction than those that came before or after them. Post-and-beam construction involves building a super-structure for a house that is then filled in by walls, windows, and rooms. Since the walls are mostly not part of the structure,  the house is completely re-configurable without worrying about whether the wall being taken down is holding up the house. This allows owners to adapt their house to their needs and their family changes. Mini-mansions lack this same kind of flexibility even though the interior space is huge.

Giving up history and the story 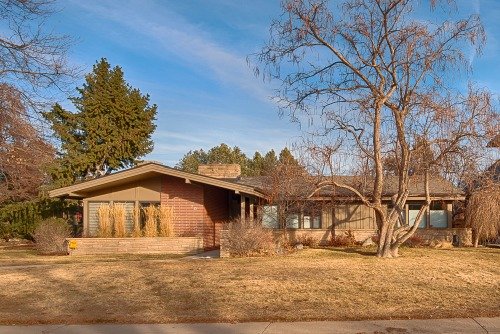 Thoughtful architecture is timeless in many mid-century modern homes.

There is an intangible value in real estate that is hard to assess by either brokers or appraisers.  But, if marketed correctly, that intangible feeling can have a real impact on the relative value of a home. When the story of a house is known–who designed it, who built it, and what ideas drove its design–prospective buyers connect with that story emotionally. For homeowners, the story can and does drive increased pride of ownership. That makes all parties feel less like they’re part of a cold, heartless real estate transaction, and more like stewards of important pieces of architecture. Among houses designed by well-known local and even national architects, the name of those architects has the same value-adding power as a name-brand does in the fashion world.

Conversely, it seems that few of the mini-mansions going up in place of mid-century modern houses carry that same weight of high-design or reputation of the architect. Instead,  they are usually cartoons of another time or place that removed from Denver. Although there are always exceptions to this premise, having more stewards and fewer “investors” in a neighborhood leads to higher values without the need for the constant demolition and re-building of its houses. This preserves a neighborhood’s history, character, pride; and in the long run, will lead to more stabilized values over time. And, things always do change with time.