Denver mortgage interest rates are unbelievable again!  From October 2010 to February 2011 of this year the economy was showing signs of recovery and inflation risks were on the rise.  Due to this, we saw a dramatic increase in rates in a four and a half month period.  But now, you have a second chance at what will likely be the lowest interest rates on home loans  in our lifetimes.

The average for a 30yr fixed mortgage climbed from 4.23% in October 2010 to 4.95% in April of 2011.  Since April we have seen the oil spill in the gulf, the disaster in Japan, the European markets going nuts and a global slowdown.

We give the media more credit than we should.  They can control markets, create fear, and even create confidence on with a simple news cast.  Truth and accuracy…who needs it?  Need examples?  When the Standard and Poors downgraded some US Debt (Specifically Fannie Mae, Freddie Mac, Mortgage Backed Securities, Etc…) the media did there thing and said just enough to create chaos.  The media said “The US has been downgraded”.  You can’t downgrade a country!  The media telling half the story created a huge selloff in the stock market.  Ironically, this triggered many big investors to yank their money out of the stock market and put it in the MBS (Mortgage Backed Securities) market since they still thought it was safe.  Yes, the very investment that was downgraded (the mortgage backed securities market) had a record day increase due to large purchases!!  When the MBS (Mortgage Backed Securities) markets go up, rates go down or vice versa.  End game…ridiculous low rates again.  Recently the FED announced that they anticipate keeping rates low through the middle of 2013.  Did they guarantee it like the press stated?  The answer is no.  Furthermore I saw multiple news casts and articles online stating that the FED was going to keep rates low on your 30yr fixed mortgage loans.  I have already explained that the MBS market controls rates so how can the FED control them?  The answer is that the FED cannot control long term mortgages on homes.  The only possible way the FED keeping rates low correlates to a mortgage is if you have a line of credit on your home.  The FED controls Prime Rate and the FED Funds rate.  Prime Rate is what drives the rate on your credit cards or revolving debt.  Because a line of credit 2nd mortgage is a revolving account, (it even shows on your credit like it is a credit card so don’t leave it maxed out) I guess the FED can “kind of” control a mortgage.  As far as the rate on your first or primary mortgage, they have no control.  I bring this up because I have had 4 or 5 buyers in the last week and a half state that they have until the middle of 2013 to by that bigger home since the rates are “guaranteed by the FED to stay low”.  That is 100% wrong and why I can’t stress enough not to just assume what you see on TV is even remotely accurate.  Ask the professionals, they will tell you the truth.  If I see on TV that the IRS is going to allow me to right off up to 40K of my income in one year for buying an new Ford truck, I am not going to run to the Ford dealership and buy one.  I am going to call my accountant and ask him if there is any truth to what I heard.  He is the professional and that is why I trust him.

Honestly, I doubt it.  Realistically, they could.  There is not much chance of them getting even lower.  There is no method to the madness that drives rates anymore.  Inflation will cause rates to go up faster than anything, but somehow we are to believe that inflation is not yet a risk?  The stock market doing well will typically cause investors to sell their MBS’s and get back into the stock market.  (This causes rates to go up when the market is doing well or vice versa)  Lately we have seen days so many days where rates go up even when the stock market is way down or vice versa.  All this in theory is abnormal, but it may just be the new normal.  The truth is that the normal ways of predicting trends in rates and seeing the future is impossible.  The normal factors don’t work together, the media creates sell-offs in the stock market with just a Header on their home page.  I seriously remember seeing the home page of CNN money the Monday morning following the announcement that the S&P had downgraded the US MBS markets saying “SELL NOW, ASK QUESTIONS LATER”.  The bottom line is that people believe this stuff; it causes emotional swings in an already unstable market and creates the inability to predict anything.  That is just one of many factors that we could talk about that has created much instability. 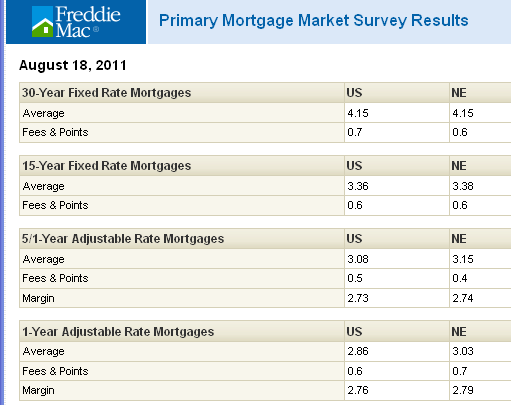 Again, I am saying the time to buy is NOW! Home prices are great, stabilized, and even increasing in many parts of the Denver Metro.  Rates are crazy low.  You can still qualify.  With great new products like our new Lender Paid Single Premium mortgage insurance on conventional loans with as little as 5% down, you can get a 95% conventional loan without monthly mortgage insurance and write off the buy-out of the MI as points.  You can still get a 100% VA loan or VA Jumbo loan.  For the most part, every loan except subprime loans and stated income or no doc loans are still available more competitive than before.  If you are thinking of buying a home but waiting on something, I would ask “What exactly are you waiting for?”

Reach Jimmy Kinley quickly  by using the form below: