If you thought Denver was an old West cow town, think again. In the past 10 years, Denver’s been taking strides to become the budding metropolis that it is today. And, as a result, we can now boast dining, entertainment, shopping and adventure that rival (or at least resemble) those of Boston and Chicago. Any Denver guidebook will direct you to the bustling downtown area known for these hallmarks and fondly named LoDo (for Lower Downtown). Although LoDo has traditionally been the hot spot for tourists and residents alike, allow me to introduce you to LoDo’s hipper, alternative, and more “in the flow” brother, Colfax.

Playboy Magazine once called Colfax was “the longest, wickeest street in America.”

Colfax Avenue is named for the 19th Century politician, Schuyler Colfax, and is 26 miles long. Running East and West through the city, it prides itself on being the longest business street in a US city. Growing up in Denver, I knew of Colfax by its serious reputation for drug dealers, prostitution and general bohemian lifestyle. Parents warned us adamantly to avoid it at night and lock our doors when driving on it during the day. Little did they know that Colfax would soon emerge as one of the hottest and most thriving areas in Denver today. 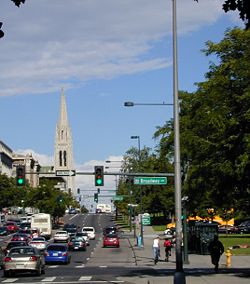 Colfax Avenue is one of Colorado’s major arteries – connecting three cities together: Lakewood, Denver and Aurora. Although this famous street has many stories, here we spotlight the stretch that graces the Capitol Hill neighborhood, located in Denver Proper. It is here that Denver business-owners, politicians, and developers have truly begun to reclaim this once demonized area. In fact, the neighborhoods and business districts surrounding Colfax have now gotten so considerable, they are divided by locals into two clear distinctions: SoCo (just south of Colfax Ave.- to about 6th Avenue, on Broadway and Lincoln) and East Co (east of Grant – on Colfax Ave., to somewhat past Colorado Blvd.).

SoCo: This area refers to the bars, clubs, lounges and restaurants south of Colfax on Broadway Blvd and Lincoln Street. Thanks to local nightclub impresario, Regas Christou, within a couple of blocks you’ll find 6 of Denver’s most popular and hardcore dance/nightclubs. One of the most notorious (and sometimes controversial) is The Church. You guessed it, a converted church, now naughty-themed dance club – complete with balconies, stained glass and original stonework.  Amid the 21 total nightclubs in this district, you’ll also find some of Denver’s best-kept secrets. Dazzle is a fabulous jazz bar that features live music every night along with a killer dinner menu. And if restaurants are more your style, you’ll enjoy Le Central (my personal favorite for affordable, authentic French food), 975, Opal and Armidas Mexican Restaurant (which has its own Karaoke night!) to name a few. An oldie but goodie, Racine’s is still a favorite for Sunday brunch.

East Co: The boundaries for East Co seem to be constantly growing. As of right now, this area is located just a bit further East (duh) down Colfax, roughly starting at Grant Street and extending down to Colorado Blvd. and several blocks beyond – please note that I am not referring the Eastern-most part of Colfax near Aurora, which is a whole other animal. This East Co area is home to a wealth of bars, restaurants, bookstores, art galleries, coffeehouses, etc. You name it and the hip urbanites are there. Probably most notable are Denver’s prized music venues, the Fillmore Auditorium and the Ogden Theater, which have both hosted the likes of Phish, Beastie Boys, Damien Rice and everyone in between. Contrary to SoCo, the nightlife here focuses more on lounges and pubs, rather than loud, glo-stick filled nightclubs. 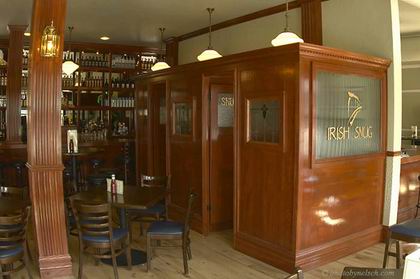 The Irish Snug Restaurant and Pub features authentic Irish snugs – small, private rooms with access to the bar historically reserved for ladies, police officers and parish priests. A great place to enjoy a Guinness. If you would rather listen to Jerry Garcia and peruse the latest in hemp fashion – Sancho’s Broken Arrow is definitely for you. Make sure to try their Grateful Dead cocktail (you only need about one). Dancing is more your style? Try Rock Bar. A snapshot of the late-70s, this “last days of disco” motel bar may seem a bit dark. But wait till about 11pm to let the rock out (and people watching) begin. One of my favorite aspects of this particular stretch on Colfax is the obvious intermingling of history and future. Greek Town (located at Colfax and Elizabeth St.) refers to the $14 million redevelopment of the Lowenstein Theater, which now features the famous Tattered Cover Bookstore, Twist & Shout Records, an art house movie theater, and a few restaurants. And yet, among the fancy new, is still the lingering of the old that shaped this notorious avenue. There is certainly no shortage of tattoo parlors, head shops, corner stores, and, of course, porn emporiums.

As for real estate, a piece of this modern-day Bohemia doesn’t come cheap. Aside from a few condo-conversions (thanks to Modo Developers), most of the residential real estate in the “Colfax action” begins around $300K. If you’re looking for something around $200K and below, you’re either looking at a one bedroom, updated condo with less than 1,000 square feet or an older, larger condo, some of which are a part of historical mansions. Be warned that parking spaces here are quite the commodity and begin at about $7,000. Good thing there are plenty of drink specials to help balance your budget!

Elizabeth Hotz is a top-selling Realtor in Colorado and the surrounding Denver suburbs. She sells over $40m in home sales annually with The Hotz Group at Kentwood Real Estate. She is also a prolific blogger at award-winning All Denver Real Estate.